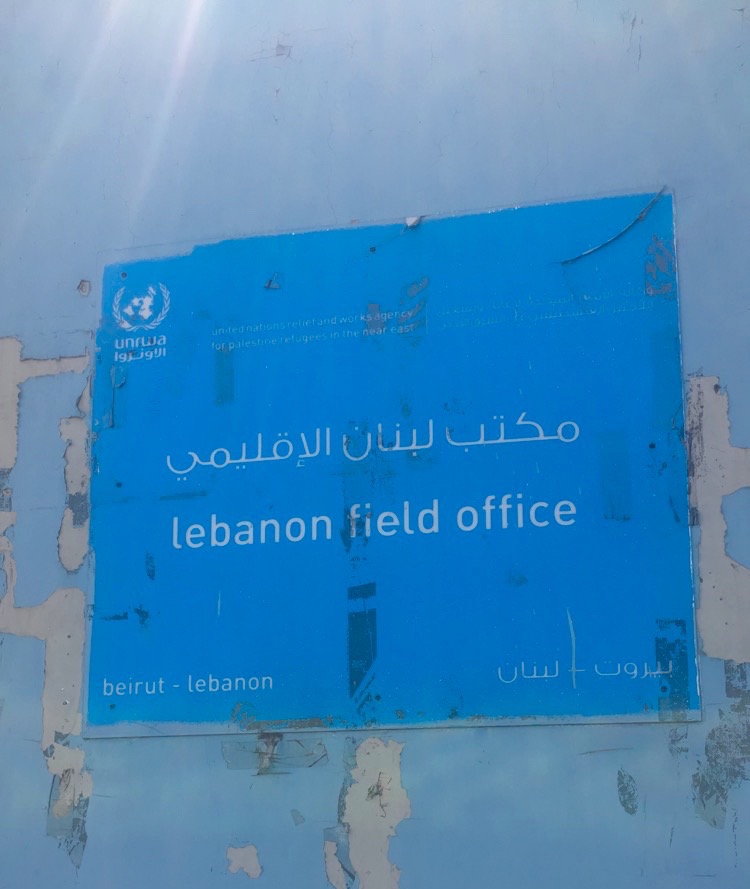 As I sit in my apartment on the eve of my second-to-last day in Beirut, I am astounded at how quickly the summer has ended.  It seems like not too long ago, on the first day of my internship, I was anxiously over-explaining myself in Arabic to the armed security outside the UNRWA Lebanon field office compound.  Just a few days ago, I smiled goodbye to the same guards, whose friendly faces I will now miss.

I spent the summer working in the Programme Support Office (PSO) at the United Nations Relief and Works Agency for Palestine Refugees in the Near East (UNRWA) Lebanon Field Office (LFO) in Beirut, Lebanon.  (If you can’t already tell, the UN is all about acronyms). My official title was “Humanitarian Support Intern,” but in reality I did much more than that.  From planning and attending events, to writing security briefings and progress reports, to taking meeting minutes, I was lucky to become involved in a variety of tasks and to learn about many projects and departments. The reason for this is that PSO’s goal is essentially its name – to support the programs of all the other departments (i.e. Education, Relief and Social Services, Donor Relations) and liaise between Headquarters and LFO (Lebanon Field Office), as well as between the Director of UNRWA for Lebanon and the various LFO departments.  PSO conducts lots of reporting and updating, as well as monitoring and evaluations of the camps, in order to make sure that UNRWA operations in Lebanon run smoothly.

UNRWA is unique among UN organizations in that it serves a very specific group of people: Palestine refugees.  It was established following the 1948 Arab-Israeli conflict, by United Nations General Assembly Resolution 302 (IV) of 8 December 1949, to carry out direct relief and works programs for Palestine refugees.  In the absence of a solution to the Palestine refugee problem, the General Assembly has repeatedly renewed UNRWA’s mandate.  Today the United Nations agency is responsible for the protection, care, and human development of a population of some 4.7 million Palestine refugees living in the Gaza Strip, the West Bank, Jordan, Lebanon, and the Syrian Arab Republic.  The Agency is committed to assisting Palestine refugees in maintaining a decent standard of living, acquiring appropriate knowledge and skills, enjoying the fullest possible extent of human rights, and leading a long and healthy life.  It is also by far the largest UN operation in the Middle East with over 29,000 staff.  Most of the staff members are refugees themselves, working directly to benefit their communities – as teachers, doctors, nurses, social workers, and field office employees.

Perhaps the most eye-opening aspect of working for UNRWA for me was that every day I interacted with refugees who were not simply Agency beneficiaries, but also my colleagues.  It meant that my understanding of what it means to be a refugee became even more complex, as my colleagues had varying opinions on UNRWA, Israel/Palestine, and their displacement.  Adding to these dynamics was the fact that the guarded compound where I worked sat right across the street from one of Beirut’s largest refugee camps, Shatila.  It was one thing to be researching and writing about the lives and identity of Palestinian refugees from my dorm room at Conn, and entirely another to be seeing the displacement firsthand – both within my office and next door to it.

I wrote camp, but Shatila – and many of the Palestinian refugee camps in Lebanon – are not “camps” in the traditional sense.  Rather, they are small cities-within-cities, and it is not always easy to tell where one neighborhood ends and the “camp” begins.  My first experience seeing a refugee camp akin to those often seen in the news, where homes are not buildings but tents, actually occurred during a guided tour to Baalbek and Anjar in north-eastern Lebanon.  The Roman and Umayyad ruins at these sites were stunning to behold, but I was most affected by the sight of several small encampments housing Syrian refugees, as the ruins lie right on the border with Syria.

Living in Lebanon is a paradoxical experience.  Buildings torn apart by bullet holes from the civil war or bombs from Israel stand next to new skyscrapers.  When I asked a local about this, I was told that some of the war-devastated buildings were left as tributes to what was lost, and as reminders for what the future could hold.  Additionally, after living in Jordan during my study abroad, it was a strange sight for me to see the diversity on the streets of Beirut: it was just as common to see a woman in a hijab as it was to see one uncovered.  It was also just as common to see a Ferrari whizzing by as to feel the tug of a homeless child’s fingers on your shirt as you walk, begging for money or food.  Lebanon’s nature and historical sites are marvelous, but its sites are at risk due to the high pollution and lack of preservation laws.  I found myself captivated by it all every day, and I will certainly miss this vibrant place.

I hesitate to write too much in this post, knowing that my experience cannot possibly be summed up in any amount of words, but look forward to catching up with my CISLA classmates in the fall and continuing to share my memories.  In Beirut, as you wave farewell, you might hear any of the following: Yalla bye! Maa salameh! Allah Ma-ik! Au revoir! Allah yaselmek! Bye!

Ciao! I’m Ege, I like writing things but I’m not as funny as Charlie or Patrick, I don’t even know…

Hola todes (instead of saying todas/os, here a lot of people say todes to include all genders), my name is…