Saludos a todos y todas! I hope all of your summers are going well. In case y’all didn’t know, I (Julie) am doing my CISLA internship in Medellin, Colombia this summer. I arrived almost exactly a month ago and have 6 more weeks to go! Time is really flying by, and I still can’t believe that I’m here. Before arriving to Colombia, I was studying abroad in Buenos Aires, Argentina from February to June with the School for International Training (SIT), and although I loved Buenos Aires, I’m really happy to be in Medellin and am amazed every day at how beautiful and innovative this city is. Plus it was winter in BA when I left, so it was the perfect time come to the city known as “The City of Eternal Spring” and bring out the shorts and Birkenstocks again.

As an international relations major with a focus on human rights, CISLA has provided me with the opportunity to pursue and expand my research on Colombia’s civil conflict and recent peace accord with a local NGO called Corporacion Region. For those of you who don’t know, the Colombian government and the main guerrilla group, the Fuerzas Armadas Revolucionarias de Colombia (FARC), signed a peace accord last November which ended the 52-year conflict that affected millions. Region works to establish peace in Antioquia, the province that Medellin is in, by working with victims of the civil conflict that live in and outside of Medellin and with local governments to implement the agreements outlined in the peace accord. Some of this work includes holding workshops to spread awareness and educate the public about the peace accord (why it’s important, what it means for them, what it means for Colombia, what happens next, etc.), educating victims about their rights, facilitating access to education and educational materials for children, and creating community projects in communities of displaced people to combat violence, drug abuse, and promote education and art.

To give you an example of the kinds of events that Region helps organize, my first week here, I went to a forum discussion/workshop on the upcoming truth commission that will begin within the next year as part of the agreements of the peace accord. Participants included representatives from other NGOs in the area, victims of the armed conflict, including displaced people and people who have loved ones who were killed or disappeared, and other human rights leaders who took part in creating the peace accord. Much of the discussion that went on that day was about what kind of truth we want in Medellin, how we can look for that truth in the short amount of time we have (this truth commission is only three years), and how we can include the victims in this process, recognize what happened to them, and find meaningful and sustainable solutions and reparations. A lot of people raised concerns that the truth commission isn’t sanctioned for enough time, and called for the need to sort of pick and choose what kind of truth we want to look for, because it will be impossible to investigate everything. Others emphasized the importance of including victims in the process and listening to victims with respect. This event was super interesting for me to participate in and I honestly felt like I was witnessing history being made given the important discussions going on about the future of Colombia. I’m so thankful to have this opportunity to be here!

What I really wanted to write about in this post was my experience today. Because the project I was originally supposed to be working on has been delayed for a variety of reasons, I joined another one that my other colleagues are working on that’s a little different, but still touches on similar themes. My colleague Carolina invited me to accompany her to a town on the outskirts of Medellin called La Loma de San Cristobal. Region currently has a project going on there sponsored by the UNHCR called “Fortalecimiento de los colectivos de jóvenes de la Vereda La Loma” or “Strengthening of youth groups in La Loma.” La Loma is home to several victims of displacement, who’s population increased significantly in 2011 and 2012 when around 70 families were forcibly displaced from their homes in a nearby town and moved here. As a result of the dramatic increase in population, combined with an already violent and poverty-stricken community, violence in La Loma grew and the community became more divided and violent. Many left, and those who stayed remained in their houses out of fear and for lack of safe community centers for themselves and for their children – many schools, libraries, and recreational centers were forcibly shut down by paramilitary gangs called BACRIM. Eventually, the UNHCR and other NGOs got involved in the community to begin creating activities for the youth to meet each other, make friends, and in general give them something to do that didn’t involve either joining a gang or staying at home.

That’s where Region comes in. Region has continued and advanced the efforts of the UNHCR in creating community spaces for youth and adults and establishing workshops and classes so the youth can learn new skills, develop their passions, and teach others what they’ve learned. The classes include photography, singing, songwriting, graffiti, hip-hop dance, crafts, gardening, drawing and design, sports and more. Region helps out by providing materials as well, such as cameras, computers, internet access and other stuff for crafts and gardening. The fact that they are encouraged to teach others what they’ve learned particularly stood out to me: once the youth (children and young adults) take enough classes to learn a particular skill, they then can choose to become a teacher of that subject in the community center and get paid to do so. My boss told me that this aspect teaches the youth that they can make a living doing what they really love to do, like teach dance classes, which is something they likely hadn’t considered before.

So anyway, I met Carolina at the closest metro station and we took a bus together to the community center at La Loma where I met five students from ages 18-21 hanging out at the center and editing some photos on Photoshop for their website. They spend most of their days at the community center to use the computer and/or internet, work on whatever project they’re working on, and just generally hang out with their friends. They were waiting on one of their rapper friends to arrive so that they could record a music video for his latest song, which he recorded in the recording studio at the community center with the help of the other people involved in the Music team. Carolina showed me around the community center a for a little bit and told me more about the project, and then we joined the rest of the group to watch the making of this music video. Today, they were recording on top of a hill by a church that had spectacular (yet polluted) views of the city, as you can see in the photo above. There were a bunch of middle school and high school-aged students walking around the area on their lunch break and watching curiously as the group recorded the from different angles and zoomed in on the rapper’s hands with the city in the background. Carolina said that the more activities they do like this – getting a bunch of young people together to produce something cool and fun (did I ruin it now?) outside – the more other people want to join. She said that it shows the community that it’s safe, fun, and productive to get outside. 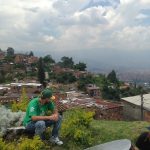 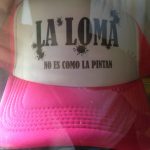 This whole project is super cool and impressive, and I’m grateful to my colleagues and the people of La Loma for inviting me to their home and letting me participate in their activities. It’s awesome to witness a town like this, one that has suffered greatly from gang violence, displacement, narcotrafficking, paramilitary and guerrilla fighting, and lack of government support and protection, continue to move forward despite the setbacks and unite itself as a community in a grassroots way. Many problems still remain, as there is still violence in the community and the presence of BACRIM, but what I witnessed was truly revolutionary and inspiring, and I can’t wait to go back.

If you want to learn more about La Loma and Region, check out their Facebook page “Loma Joven” or this video about the project that I told you about this post: https://www.youtube.com/watch?v=-G4SKGGdUX8

Thanks for reading this super long post! There’s still so much more to share about my experience here, but that will have to do for now.

Although I’ve been in Valencia, Spain for a little over a month, the real fun began last Thursday. Don’t get…

My summer in Madrid

WRITTEN JUNE 26TH Hello everyone! I’m reporting – happy and well, despite heatwave- from Madrid, Spain! After enjoying a month…

CISLA students and staff enjoyed CONNecting last Friday evening over a lovely dinner.  Juniors and Seniors had a great time…